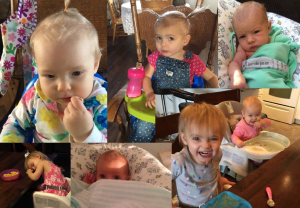 I once lived with the delusion that when my children turned 18 my responsibility as a parent would drop right off. Not to zero, but dialed way back.

Then I thought that once they moved out of the house, and certainly once they were married…

But then the granddaughter showed up. And another one. And who knows how many more are going to burst into our world.

And it’s completely reoriented our hearts and minds.

Every decision we make now takes these little messy, beautiful creatures into account.

We’ve had the rich privilege of living just down the hall from them in the same condo complex for just over two months. Now they’re moving.

And their new home doesn’t have a suite for us.

And I’ve been told it’ll be at least two years before we can move out that way without it being weird.

We now understand those odd grandparents who are so fixated on their grandchildren. We’ve become one of those couples.

Becoming a grandparent has given a new understanding of parenting- 20 some years later than I would have liked, but maybe not for you.

Here’s the thought I have shared with many:
The moment you hold your first child in your arms, imagine them as a parent and you as a grandparent. Think about what it means to raise that child to be a parent and what your role will be in making them successful in their parenting.

It will add another layer to your parenting.

It won’t just be about getting them diaper trained, but equipping them to diaper train their potential children.

It won’t just be about getting them to behave but transferring values.

It won’t just be about teaching them to share their toys but about living lives of generosity and gratitude.

At a stage of life where you’re tempted to think you’ve figured life out, you realize there is another facet, a longer view, another generation.

And it messes you up.

In a good way.