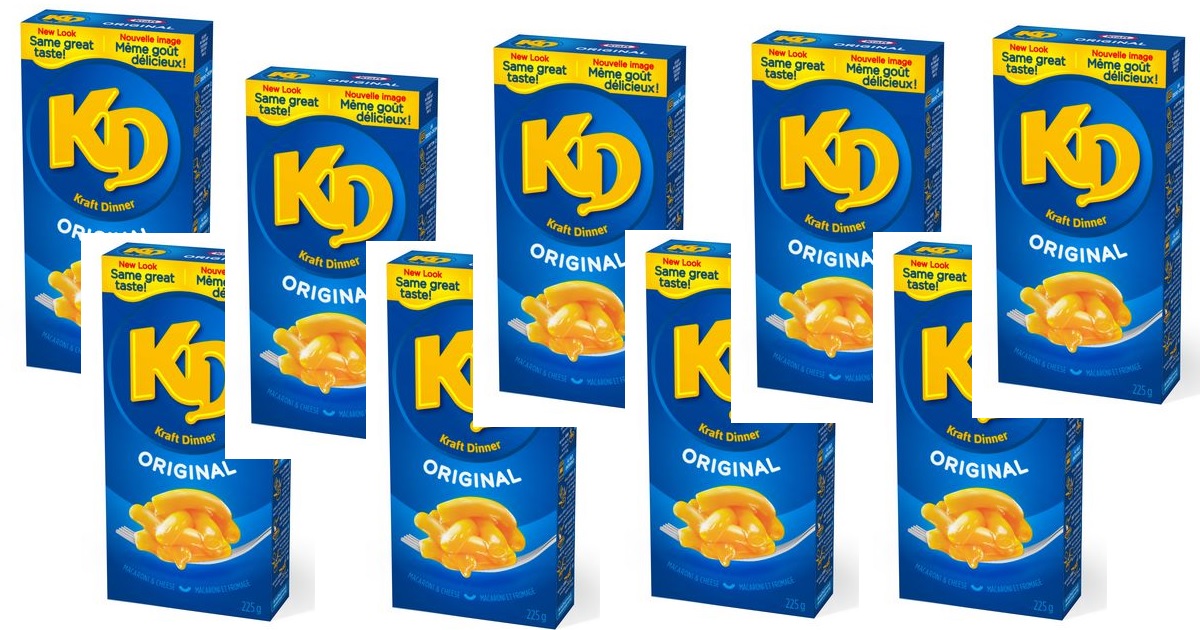 In honour of Canada’s 150th, and by popular demand, once published in a different context, here is

The Right Way to Make KD

Kraft Dinner is a much maligned food product, loved by some and mocked by many. In my observation, a big part of the problem comes from the fact that often when people have tried it and not liked it, they made it wrong. Well, even a good steak can be cooked poorly and become almost unpalatable; the same is true with this fine Canadian food staple. So here is my attempt to get you to give KD another try, cooked the right way.

First of all, get the basic KD, not some of the many variations with different types of noodle and cheese mixes that Kraft has for some reason pumped out into the market. Why try to improve on perfection? And, make sure you are dealing with actual Kraft Dinner, not some other brand attempting to capitalize on the success of this product.

Now, get a pot of water boiling, ideally a no stick pot, and use more water than they tell you to use in the instructions. You want lots of water, not just enough to cover the noodles. The idea is to get the noodles in there with enough water to keep a rolling boil that pretty much does all the stirring for you. If you are not using a Teflon coated pot, you will probably need to stir almost constantly to keep the noodles from sticking anyway.

While the noodles are cooking get a colander in the sink, and get out your butter and milk so they will be ready for the rapid steps which will soon be required.

Forget about using a timer to tell you when the noodles are done; use taste testing. DO NOT under any circumstances overcook them into a mushy state; that is the equivalent of cooking a t-bone steak to the well-done stage, which is of course unethical and may even be a sin.

When the noodles are done, that is, cooked but not overcooked (often referred to as “al dente”) you are now at the most critical stage of the process.

*Important Edit: Thanks to Laura Chee for correcting my evil practice of rinsing off the noodles. See her comment below this post.
Stir and shake the noodles to get excess water out of the mix. Leave the noodles for a second and shake the cooking pot dry before putting in a *dollop of butter. DO NOT use a light margarine which contains a lot of water.

(*Note: A dollop in this case is slightly more than the quarter cup called for in the recipe. Since we’ve already lowered the glycemic index of the noodles a little extra fat is just fine.)

When the butter is half melted in the bottom of the pot, give the noodles another stir and shake and dump them into the pot. Stir in the butter with the pot tilted slightly toward you. This will cause some of the butter to pool in the bottom corner allowing you to take a couple spoonfuls of hot noodles with melted butter, which is really quite tasty. If you are cooking for guests don’t let them see you do this.

Finish stirring the butter evenly into the noodles. Then open the “cheese” envelope and shake it over the noodles. Stir the cheese in until the noodles start to bind, but stop before you tear that precious pasta.

CRITICAL STEP: Add the milk. DO NOT use the amount they call for in the recipe as this will make your KD runny and more like noodle soup. This is a common mistake of beginners. Add a splash of milk and mix it in. Keep adding small amounts of milk (literally 1-2 tablespoons at a time) until the cheese mixes in smoothly and there is a slight amount of cheese sauce pooling in the corner when you tip the pot sideways. Next to not overcooking the noodles, not flooding the pot with milk is the most important step.

Take a couple spoonfuls from the bottom corner of the pot; it’s very tasty and is your right as the cook to enjoy. Again, conceal from any nit-picky germophobe guests who may be present.

The best side dish with KD is jalapeno cheese smokies made with wild meat. Also BBQ’d steakettes or deep fried grouse nuggets.

The Ketchup Issue: Some purists believe that KD should never be eaten with ketchup. Ketchup is in fact acceptable under the following conditions: 1) You have eaten more than half of your KD serving already and it is getting cold, and 2) The ketchup you use is French’s. (Anything except Heinz is acceptable. No true Canadian should ever use Heinz ketchup after what they pulled in Leamington.) 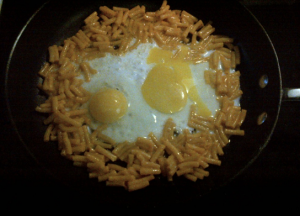 Leftover KD: Leftover KD should be placed in a sealed container in the fridge and hidden from the kids. When you are ready to eat it (as a night snack for instance during an episode of Dragon’s Den) you can either mix in some Bullseye BBQ sauce and heat it in the microwave or fry it in a no stick pan. Add the Bullseye after frying.

Another option is to have it for breakfast, by starting to fry two eggs and then spreading the KD around them to get heated up. I’ve never actually tried a KD omelette but see no reason why it wouldn’t work.

27 thoughts on “The Right Way to Cook Kraft Dinner”