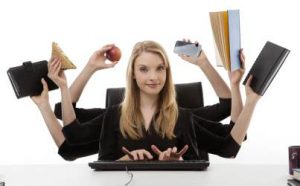 Just saw another one: A job description calling for the skill of multitasking.

“We are looking for someone who is a high capacity leader, team player, people magnet, mobilizer, multi-tasker and a great communicator.”

Translation: Let us hire you and kill you.

While there is some evidence that the female brain is capable of a certain level of true multitasking, I’m not aware of anything suggesting this is an effective, sustainable way to operate.

What we usually call multitasking is actually task-switching, doing many different things one at a time, switching between them so rapidly that it looks and feels like we are multitasking.

We might even get a bit of an adrenalin buzz from the sense that we are getting stuff done.

But every time we switch tasks we’re forced to unplug from one task and get oriented to the new task. This costs time and mental energy and is both ineffective and inefficient.

Identifying the most important task in relation to your mission or your role and focusing all your attention on it.

The world is shaped not by multitaskers, but by the actions of focused people.