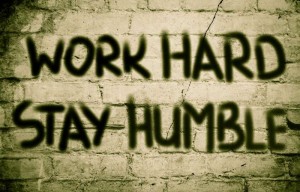 I used to think I had a pretty decent work ethic. But then I met a fellow I will refer to as Larry.

Larry lost everything in a business failure. He ended up on the streets. In order to have a better chance at finding a job, he moved to another area of the province that had more opportunity. His new home was a homeless shelter and then transition housing.

While in the shelter, Larry worked at odd jobs and saved money until he could afford a $300 vehicle, which then became his new residence. He felt it was a healthier place for him and he takes great pride in its cozy efficiency.

He continued to work at odd jobs while applying for longer term work locally and in the surrounding area. He finally landing a job offer, but it was conditional on him completing several online courses and exams. So he jumped in and started taking the courses, stopping whenever he ran out of money to work for a day or two. Larry has often requested that I let him know if I hear of any odd jobs that needed doing around town. Sometimes he simply parks himself at the local employment center so he will be right there when a job opportunity arises. One of my other friends has hired Larry for assorted projects, and he reports that Larry is a very hard worker. He is also very well groomed- a challenge while living in a vehicle- and exceedingly polite.

As I write this, Larry is nearing the end of his courses. His overall mark in the primary course is 94%. There are still several hoops for him to jump through to land the job he has been offered- and I pray that the company indeed comes through with the job. But it looks like he is going to make it!

Larry has never asked me or anyone I know for money. All he ever asks for is work, or a few minutes to talk. He has great compassion for the homeless and hopes that someday he will be in a position to help them. I know that even now he occasionally buys food from his meagre finances for those who are hungry. His ambition is to build a small log cabin the woods where he can live a simple life and work to repay his debts.